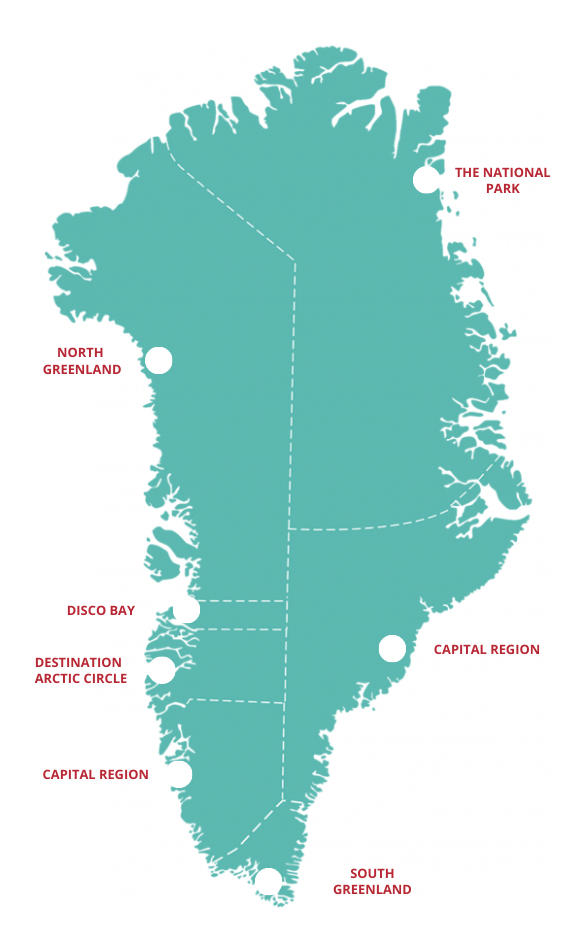 NORTHERN LIGHTS
This phenomenon is a source of great interest to many of us living here in Greenland. We keep an eye out for the northern lights through online forecasts, follow live updates of how the northern lights are spreading across the Arctic, take lots of photos with great enthusiasm, and love to take our guests out in the dead of night to view the sky.

DOG SLEDDING
Dog sledding in Greenland has been a mode of transportation and hunting for approximately 5000 years. Recently, it has also become a leisure activity for Greenlanders and tourists.

PIONEERING PEOPLE
We are often called hospitable, cheerful and kind, but even if such universal traits will shape your experience of Greenlanders, we might be better characterized as adaptable, full of wanderlust, and culturally diverse. Meet us here.

WHALES
Set sail on a whale watching tour to spot humpback whales, fin whales and minke whales frolicking and feasting in Greenland’s waters during their own summer holidays.

ICEBERGS
Greenlanders once used icebergs to distinguish the seasons and even to identify towns – a testament to their steadfast presence and to the intertwined quality of Greenlandic culture with our country’s powerful nature. Media stress that the ice in Greenland is melting, and while this is absolutely true, as long as the Greenland Ice Sheet exists, icebergs of all shapes and sizes will fill these Arctic waters.

View more things to do in Greenland

North Greenland is the land of the midnight sun and dog sledding. A cornucopia of arctic experiences with giant icebergs and the Ilulissat Icefjord, honoured with a place on the esteemed list of UNESCO World Heritage Sites.

From the Ilulissat icefjord in central West Greenland to the polar extremes of the far north, the scale of Destination North Greenland is hard to fathom. Along a coastline stretching thousands of miles lie small communities based on hunting and fishing, in a land ruled by the polar night in winter and the summer’s midnight sun.

The Ilulissat Icefjord is known for diversity in landscapes and wildlife, high-quality hotels, and culinary experiences. As a concentrated slice of Greenland, you will meet massive icebergs from one of the world’s fastest flowing glaciers.

Further north, the Uummannaq archipelago and kayaking adventures in Upernavik open up a remote world of experiences culminating at the top of Greenland in the small town of Qaanaaq, where subsistence hunting is a way of life. 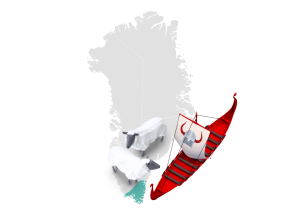 Dirt roads and hiking trails between farming communities, and a great band of sea ice flowing straight down from the northern seas are all unique South Greenlandic elements.

All this is tied together by a distinct South Greenlandic culture with strong ties to the history of the North Atlantic and a sense of sharing stories and welcoming guests. 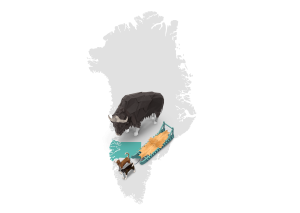 Home to Nature Beings. Destination Arctic Circle is the land of adventure. The combination of raw nature and cultural traditions brings you the heart of modern Greenland.

Destination Arctic Circle is home to Greenland’s only road to the Ice Cap, a dog sledding route linking the country’s second largest town Sisimiut to the international airport in Kangerlussuaq, the world’s toughest ski race Arctic Circle Race, unspoiled river angling in remote mountain valleys, and top notch heliskiing around the Eternity Fjord, to name but a few.

Adventure is at the core of the journey in Destination Arctic Circle and the region’s diversity of experiences brings you right to the heart of modern Greenland.

Dog sledding, skiing, hiking, hunting, fishing, and kayaking are activities deeply embedded in the region’s human history. They form the back bone of many of the greatest adventures in Destination Arctic Circle. 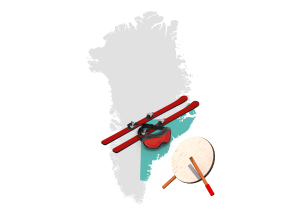 East Greenland is an isolated yet very special place. The language is different and the culture is deeply rooted in myths and legends, which is expressed in their much coveted handicrafts.

Destination East Greenland is just a short flight from Iceland but its culture and landscapes are a world away. In a land dominated by the Ice Cap and impossibly steep mountain ranges, 3,500 people have made their home.

East Greenlandic culture is deeply rooted in myths and legends, often expressed in bone and rock carvings, but at the same time it is a globally connected culture with strong hunting roots and an everyday spirit of adventure.

Greenland’s capital, Nuuk, is an Arctic metropolis with a small town feel, shaped by nature and known for its cultural diversity. As a city break in Greenland it mixes shopping, whale watching, skiing, and fine dining into a cosmopolitan experience with a backcountry twist where innovative, adaptive people, and trendsetting artists meet office workers, fishermen and hunters. Organic Greenlandic ingredients meet Thai spices in gourmet restaurants and cozy takeaway stores in Nuuk. Legends and traditions are reinterpreted by local artists, musicians, and designers.

Politicians lay the groundwork for the building of a new and independent nation. And icons like the Northern Lights-inspired Katuaq Cultural Center serve as a reminder of the nature that is an ever-present part of life in Greenland.

While Nuuk is the colourful heart of this nation, the smaller communities of Paamiut south of the capital and Kapisillit in the Nuuk Fiord are places to kick back and spend time in the outdoors, either en route with the coastal ferry Sarfaq Ittuk or on a weekend holiday.

Learn more about The Capital Region 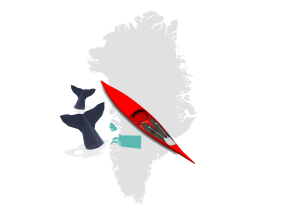 From the strange volcanic rocks along the hiking trails on Qeqertarsuaq and the island’s summer dog sledding on the Lyngmark Glacier, to the many whales and birds in the bay, Disko bay is waiting for you to fulfill your bucket list!

Covering an area of 972,000 square kilometres, Greenland’s National Park is the world’s largest – with approx. 40 inhabitants and high Arctic species of animals.

Covering an area of 972,000 square kilometres, Greenland’s National Park is the world’s largest. The area is nearly the combined size of France and Spain and includes the entire north eastern part of Greenland north of Ittoqqortoormiit (Scoresby Sound) and stretches from Knud Rasmussen’s Land in the north to Mestersvig in the east.

The coastline is 18,000 km in total and includes both the highest parts of the Northern Hemisphere’s largest ice cap and the world’s northernmost area of land. For thousands of years, various Inuit cultures have lived and survived here thanks to the high Arctic species of animal.

Learn more about The National Park

Registration is closed for 2022

BUYERS
EXHIBITORS
Scroll to Top
We use cookies to ensure that we give you the best experience on our website. If you continue to use this site we will assume that you are happy with it.Ok